Posted by Super User on Wednesday, 03 May 2017 in General News

After three years of hard work, the results of the ECOSSIAN project were presented in the final European Demonstration, which took place on 26th April 2017. A prototype system has been developed, which facilitates preventive functions like threat monitoring, early indicator and real threat detection, alerting, support of threat mitigation and disaster management. The ECOSSIAN technical architecture includes three levels of operations centres (at Critical Infrastructure operational national and European levels), along with interfaces to legacy systems (e.g. SCADA – Supervisory Control and Data Acquisition). The system has been validated in Critical Infrastructure scenarios of the sectors Finance, Transportation and Energy. The operational demonstration dedicated to the use-case protection of European Critical Infrastructures against cyber-attacks, was hosted in the Airbus Group premises in Elancourt near Paris/France. Approximately 80 participants attended the successful event, which was accompanied with interesting questions and discussions during an informal cocktail reception and technology exhibition after the demonstration. 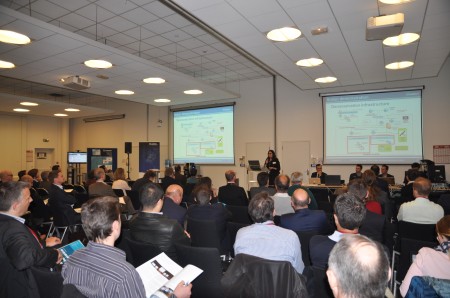 This project has received funding from the European Union’s Seventh Framework Programme for research, technological development and demonstration under grant agreement no 607577